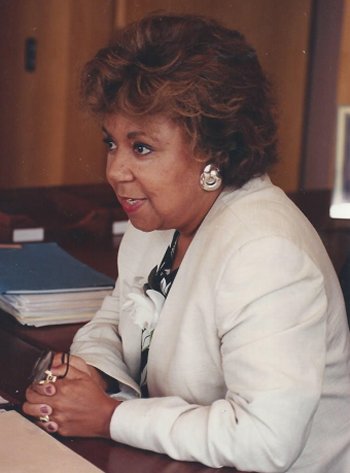 Dr. Grace Carolyn Brown—a nurse who became a community college president, and, in her sixties an associate Roman Catholic nun—is the 2015 Honored Alumnus of the Salem High School Alumni Association.

She was the featured speaker at the association's 134th Annual Reunion and Banquet on the evening of Saturday, May 23, in the Salem High School cafeteria. The association awarded 112 scholarships to graduating seniors and alumni during the program that began with dinner at 6 p.m.

Frank Zamarelli, second vice president of the Salem High School Alumni Association, said, "Applications for the Honored Alumnus Award have been submitted from all 50 states in the past. We are excited to honor one Salem High School graduate that has excelled in her professional life, and we are honored to have Dr. Brown here in Salem, Ohio, to accept her award.”

Dr. Brown rose through the administrative ranks at Cuyahoga Community College (Tri-C) during the public two-year college's enormous expansion in Cleveland during the 1970s and 1980s. From 1984 to 1991 she served as president of Tri-C's Eastern Campus in Highland Hills, Ohio. In 1992 she became president of Roxbury Community College in Boston, Massachusetts. She retired in 2003 and returned to Cleveland, where in 2005 she became an associate nun with the Sisters of Saint Joseph.

During her 11 years as the leader of Roxbury Community College, one of the few historically Black colleges in New England, Brown was invited to White House events and attended numerous Harvard University programs for visiting dignitaries. Among her favorite memories from her time in Massachusetts are events where she talked informally with South Africa President Nelson Mandela and U.N. Secretary-General Kofi Annan.

As an African-American woman in college leadership positions, Brown broke numerous race and gender barriers; many times she was the only woman or the only person of color in a room of decision makers. Throughout her career in academia, Brown focused on establishing standards of excellence and helping students perform to those standards.

"I was aware that I might have been judged by the color of my skin and always, always wanted to lead in ways that were not threatening, but that would address the issues on the table," she said during a recent telephone interview.

Her career in higher education leadership stemmed from her first career as a nurse. "I wanted to be a nurse from the time I was two or three years old," she said, adding, "I really enjoyed relieving pain, helping people walk again."

A 1954 graduate of Salem High School, Brown received her registered nurse’s training through Metropolitan General Hospital in Cleveland. After graduating from the hospital's three-year diploma program in 1960, she worked in the hospital and soon became a nursing supervisor. However, she preferred more direct patient contact and took a job with the Visiting Nurses' Association. It was a tumultuous time in Cleveland's urban neighborhoods, but Brown liked public health and was encouraged to continue her education. She earned her bachelor's degree from the Francis Payne Bolton School of Nursing, now part of Case Western Reserve University (CWRU), in 1965.

While working for the Visiting Nurses' Association in the late 1960s she was asked to teach in the associate degree nursing program at Tri-C's Western Campus in Parma, Ohio. Because, at the time, Cleveland was more racially segregated, the college administrator wanted to make sure Brown was willing to venture into the mostly white suburbs to teach the children of Eastern European immigrants.

"I'm from Salem—it doesn't make any difference," Brown said she told him, explaining that growing up in Salem prepared her for dealing with people of all races and ethnicities.

Pronouncing her students' polysyllabic names was a little challenging, but Brown eventually learned common phrases in four languages. Along the way, her focus on academic excellence won over her colleagues and she was elected vice president of the faculty senate. With the high passage rate of the Western Campus nursing program graduates on the state licensure exam, Brown was recruited to improve the struggling associate degree nursing program at Tri-C's Metro campus near downtown Cleveland.

After earning a master's degree in nursing from CWRU in 1972, she became director of Tri-C's entire nursing program. In 1979, she earned a PhD in education from Nova Southeastern University of Fort Lauderdale, Florida.

As Tri-C expanded into one of the largest community colleges in the nation, Brown's responsibilities grew too. She was eventually promoted to college-wide executive vice president of academic affairs. In 1987 she was named president of the college's then-new Eastern Campus. She proudly points out that the Eastern Campus opened a unified technology center when the personal computer era was just beginning.

In 1992 she accepted the presidency of Roxbury Community College. For the urban college's mostly underprivileged, foreign, and African-American students Brown provided stable leadership both in the college and in the community for more than a decade. As president she had her share of challenges too, including students occupying the college administration building for 30 hours in 1998. Brown's negotiations with the students brought a peaceful end to the protest.

"It was an exhausting 11 years when I was there. Never a time of peace. It took everything I had," she said.

During Brown's tenure, the college became accredited for the first time. The nursing program and several other programs gained national, discipline-specific credentials. She obtained behind-the-scenes help from Harvard University educators and librarians to modernize the community college's library. She won state funding to build a new athletic center. And she started a guest lecture series to raise Roxbury Community College's profile and students' aspirations.

"We were able to get a lot done," she said. Her approach of "breaking down the issues into manageable pieces that you could get your hands on" was similar to what she used at Tri-C. She also enhanced her personal education experiences by earning a management certificate at Harvard and teaching at the Harvard Graduate School of Education. She also earned a graduate studies certificate from Kent State University in 1968.

The difference between Ohio and Massachusetts was the ferocity of state and local politics, and the historic weight of battles that people seemed able to trace back to the 16th century. She describes the prevailing attitude as, "We're here to win. If we beat you up that's the way it goes. If you win, we'll get you the next time." College administrators competed against each other and every other state entity for money; the legislature controlled every line item in colleges' budgets.

After resigning and taking a year-long sabbatical, she returned to Ohio, took a break from work, and devoted her attention to her then teen-aged daughter, Julia Mary Grace Brown. She had adopted Julia as an infant in 1989, several years after her marriage ended in divorce.

In 2005, at a time when many of her contemporaries were retiring, Brown became an associate nun of the Sisters of Saint Joseph and received seminary training as a pastoral minister.

"Nuns are my heroines ... they are all over the world saving lives and improving life for all whom they touch," she said.

She now leads activities at St. Agnes-Our Lady of Fatima Church in the Hough neighborhood of Cleveland and serves on the Roman Catholic Diocese of Cleveland Committee on Racism. Her other community service activities include an Ignatian Spirituality Project that helps women formerly addicted to drugs rebuild their lives and the board of the Snickerfritz Cultural Workshop for the Arts that brings art into impoverished East Cleveland.

"I still mentor women who wish to be college presidents," she said.

Brown also delights in spending time with her three-year-old grandson, Jeremiah Ryan. Brown's grandparents, Granville V. Woods and Grace Woods, were extremely important to her and vital to who she is today.

When she was about 18 months old, Brown moved into the West Wilson Street home that her grandfather had built in Salem. Mr. and Mrs. Woods provided a stable home while her mother, Julia Lavenia Woods Brown '34, attended college in Cleveland. Brown's father was Edward Brown of Kent, Ohio. Her mother's brother, Granville C. Woods '35, was also a positive adult influence.

Brown said she grew up as a " as a very confident, very open, and secure child. I wasn't afraid of people. I was a Salemite, and went to school and made friends with everybody around. I was secure.” Then and now Brown says she was proud to be the descendent of incredible, wonderful people. Some were African-American, White, some American Indian, and a few were from Canada.

In those days "no one said you could do anything you wanted," Brown said. But her grandparents and parents did ask her what she wanted to do and then helped her figure out the steps to attain her goals.

Brown attended Salem public schools from kindergarten through high school. Her education also involved immersing herself in the Salem Public Library's book collection, reading an author at a time. "I lived in the library ... the librarians were wonderful," she said.

She also has fond memories of the families of her childhood friends: the Huddlestons, Dunlaps, Alexanders, Fords, and Crookstons.