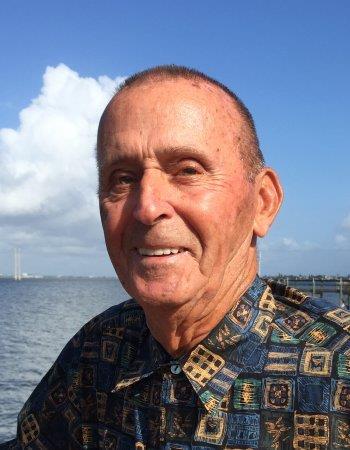 As the 2016 Honored Alumnus, Bob Hickey '50 was the featured speaker at the 135th Annual Reunion and Banquet on May 21.

In his speech, Hickey referred to his family's modest financial circumstances when he was born and the experience of growing the business his father started in 1942. Hickey retired from the helm of Hickey Metal Fabrication in 2012; the company currently employs 180 people at four Salem manufacturing facilities.

"We have a fourth generation in the company and I am very proud of that. That doesn't happen too much," Hickey said. He was referring to his three grandsons—Nick A. Peters '98, Ben K. Peters, and Adam L. Hickey '06—who are involved in the company's leadership along with his son Leo P. Hickey '74 and daughter-in-law Suzanne Hickey. A fourth grandson Keith, a practicing attorney, resides in Ponte Vedra, Florida, with his wife Noelle and son Ronan.

Hickey then directed his remarks to the Salem High School seniors who graduated on May 29. "Starting out in life you have to work hard. Because if you don't work hard, you aren't going anywhere. You work hard and save money—you will be very successful."

To those "leaving the nest" Hickey said, "When you go to college learn one thing: pick who your friends are going to be that have the same values that you have because there are a lot of problems in this country today with drugs ... do not get involved in that because it can ruin your life, what you are going to do. You could even go to jail, and I don't think you want that."

He ended by saying, "I hope all you young people enjoy life as much as I have."

In the past ten years, Hickey has shown his strong support of the alumni association by leading his family's endowment of three named scholarships to help students pursue careers in trades, healthcare, and business. Those scholarships are the Hickey Metal Fabrication Vocational Scholarship, the Nancy Hickey Memorial Healthcare Scholarship, and the Lois A. Peters Memorial Business Scholarship.

Hickey and his family are also major contributors to the Salem schools, the Salem Elks, and the National Flag Truck.

During an interview before the banquet Hickey described himself as "not college material" when he graduated from Salem High School in 1950.  "I wanted to go to work," he explained.  By that time he already had several years of on-the-job experience and was thrilled that his parents gave him a set of tools in a Kennedy tool box for graduation.

He still has the tools and tool box, which he treasures.

Hickey's career began at the age of 11 when he started working for his dad's heating and roofing business. During World War II his work tasks included crafting shoebox-size metal boxes that people used to mail food and other items to soldiers and sailors fighting overseas. He typically earned about 80 cents a week. It was not much but he fondly remembers being able to pay a dime to attend the movies at the Grand Theater in Downtown Salem on the weekend, buying a soda and a popcorn for a nickel each, and banking the rest of his pay.

After serving in the U.S. Army in Korea during the war there, Hickey returned to Salem to work with his father, Leo R. Hickey. When his father died at the age of 50 in 1954, Bob Hickey took over the business. He had two employees. For many years his first wife, the late Nancy Howell Hickey '53, did the company's bookkeeping and other office work from their home.

"It hasn't been easy. We grew the business and put the money back in the business," Hickey said, adding that he is grateful to the many friends who provided work for the company over the years.

Over the years the company evolved from a roofing company into a job shop that fabricates metal products to the specifications of customers throughout the nation. The company specializes in manufacturing products for the towing, trailer, and railroad industries as well as diverse local businesses.

Hickey said he never considered expanding anywhere other than Salem. It pleases him that the company continues to grow with people who live in and near Salem. "My roots are in Salem, so that is where I stayed," he said, pointing out that some employees have been with the company for 15, 20, and 25 years.

Hickey and his second wife, Karen, reside near the business in the Georgetown Road house he bought when the company was small. "I'm still a hometown boy," he said.